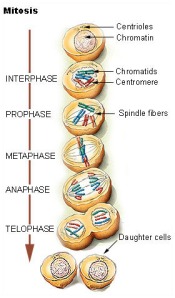 Chemotherapeutic drugs that interfere with the normal progression of cell division are used regularly for anti-cancer treatment. These so-called “antimitotic” drugs work by halting the cell cycle in mitosis, thereby inducing cell death (apoptosis) in tumor cells. Unfortunately, these compounds act not only on proliferating tumor cells, but exhibit significant side effects on non-proliferating or normal cells.

Aurora kinases (AKs), a specific family of protein kinases, are essential for various steps in human cell division. The cell division process is one of the hallmarks of every living organism. Within the complete cell-cycle process, mitosis constitutes one of the most critical steps. The main purpose of mitosis is to segregate sister chromatids into two daughter cells. This process is tightly regulated by several proteins, some of them acting as check points that ultimately ensure the correct coordination of this critical biologic process.

There is evidence linking AK overexpression with various types of malignant human cancer cells. Given the potential selectivity to target tumor cells while leaving normal cells unaffected, several “AK inhibitors” have been developed by various drug companies. Researchers at the University of Texas M.D. Anderson Cancer Center (Departments of Gynecologic Oncology, Surgical Oncology, and Cancer Biology) and the Baylor College of Medicine (Departments of Molecular and Cellular Biology and Obstetrics and Gynecology) tested MK-0457, a small molecule AK inhibitor, alone and in combination with docetaxel against ovarian cancer growth in vitro and in vivo. MK0457, initially developed by Vertex Pharmaceuticals Inc. (Vertex), is now being developed clinically by Merck & Co., Inc (Merck) for use against treatment-resistant forms of advanced leukemias.

Note: In November 2007, Merck suspended new patient enrollment in two leukemia trials which involve the use of MK-0457. The suspension of new enrollees was attributable to preliminary safety data that indicated a potential cardiovascular effect in one patient. The safety findings from that patient indicated “QTc prolongation” (or “Long QT Syndrome“), a condition that can precede sudden cardiac arrest. Patients already enrolled in the two leukemia trials were permitted to continue treatment with MK-0457, provided that they were monitored for QTc prolongation. To our knowledge, based upon publicly available information, there have been no further reports of QTc prolongation within those two clinical trials.