How do you define tragedy? … The loss of Archibald “Moonlight” Graham and Sue-Louise Newmann is certainly tragic, however, their lives exemplify hope and inspiration. 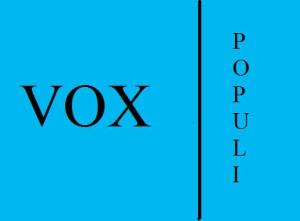 Alabama Crimson Tide 37 — Texas Longhorns 21.  That was the final score of the Citi BCS National Championship football game, which was played in the Rose Bowl on January 7, 2010.  The Texas team experienced a major setback in that game when quarterback Colt McCoy, a 2008 Heisman Trophy Finalist, was injured during the first quarter of the game. More specifically, the Texas quarterback was injured on the fifth play of the game. At that moment, all football fans understood the significance of the injury in light of the following records held by Colt McCoy at game’s start: highest NCAA single season passing completion percentage (77.6%); highest NCAA career passing completion percentage (70.9%); and most NCAA football game wins by a starting quarterback (44).

I watched that BCS National Championship game with a friend.  Immediately after Marcell Dareus –an Alabama defensive lineman — hit McCoy, and it was clear that the Texas starting quarterback would not return to the game due to a shoulder injury, my friend exclaimed: “That’s a tragedy!” He elaborated upon his initial comment by describing how important McCoy was to the Texas football team and how Texas’ chance for victory walked off the field along with its injured quarterback. In total dismay, my friend went on to described how important this game was to Colt McCoy and his future National Football League career and related compensation package.

Shortly after football game ended in a Texas defeat, I began to think about my friend’s comment.  It seemed fair in the heat of a sporting moment.  A few hours later, it seems outright ridiculous.  I began to think about what most people consider “a tragedy” in life, and what, if any, example(s) could be used to appropriately define this term in the context of an individual’s life. Two individuals came to mind as a way to place a human face on the proper meaning of the term:  Dr. Archibald “Moonlight” Graham and Sue-Louise Newmann. 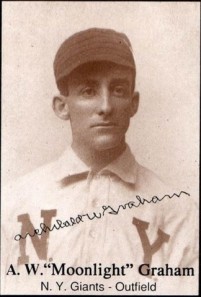 Archibald “Moonlight” Graham was an American professional baseball player who appeared as a right fielder in a single major league game for the New York Giants on June 29, 1905. His story was popularized by Shoeless Joe, a novel by W. P. Kinsella, and the subsequent 1989 Oscar-Nominated “Best Picture” Field of Dreams, starring Kevin Costner, and featuring Burt Lancaster and Frank Whaley as older and younger incarnations of “Moonlight” Graham. On June 29, 1905, the Giants were the visiting team against the Brooklyn Superbas. In the bottom of the eighth inning of that baseball game, Graham was sent in to play right field, replacing George Browne. In the top of the ninth inning, Graham was on deck to bat next when his teammate Claude Elliott flied out resulting in the third and final out. Graham played the bottom of the ninth inning in right field but never came to bat, and that game turned out to be his only appearance in the major leagues.

After playing in the minor baseball leagues through the 1908 season, Graham completed his medical degree from the University of Maryland in 1908.  He obtained his medical license the following year and began his practice in Chisholm, Minnesota. According to Veda Ponikvar, founder of The Chisholm Free Press and Tribune, Graham jumped on a train to Minnesota after reading a small ad listing a doctor’s position. Once in Chisholm, Graham never left. He lived in Chisholm until his death 54 years later in 1965.  “Doc” Graham, as he became known after his career as a ballplayer, served the people of Chisholm for fifty years. From 1915 to 1959, Graham was the doctor for the Chisholm public schools.

In the movie Field of Dreams, Iowa farmer Ray Kinsella (Kevin Costner) hears a disembodied voice in his cornfield, telling him “If you build it, he will come.” This mysterious occurrence leads Ray into the past, on an unexpected cross-country journey, and in search of an elusive connection with his long deceased father. This is a magical film about the transformative power of baseball, the love of a son for his father, and believing in something that you can’t quite define in words. In the later part of the movie, a mystical clue leads Ray to Chisholm, Minnesota.  Once in Chisholm, Ray meets the reincarnated spirit of elderly “Doc” Graham.” Graham tells Ray the story of his life including his single appearance in a major league baseball game — a game in which he never batted. The movie dialogue below provides one example of the proper definition of  “tragedy” in the context of an individual’s life: 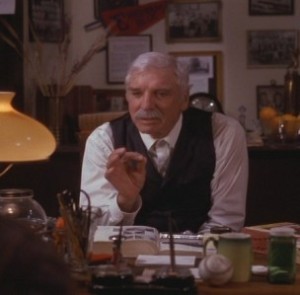 Dr. Archibald “Moonlight” Graham: Well, you know I… I never got to bat in the major leagues. I would have liked to have had that chance. Just once. To stare down a big league pitcher. To stare him down, and just as he goes into his windup, wink. Make him think you know something he doesn’t. That’s what I wish for. Chance to squint at a sky so blue that it hurts your eyes just to look at it. To feel the tingling in your arm as you connect with the ball. To run the bases – stretch a double into a triple, and flop face-first into third, wrap your arms around the bag. That’s my wish, Ray Kinsella. That’s my wish. And is there enough magic out there in the moonlight to make this dream come true?

Ray Kinsella: Fifty years ago, for five minutes you came within… y-you came this close. It would KILL some men to get so close to their dream and not touch it. God, they’d consider it a tragedy.

Dr. Archibald “Moonlight” Graham: Son, if I’d only gotten to be a doctor for five minutes… now that would have been a tragedy.

Ray, like my friend, defined “tragedy” in the context of a kid’s game that turned professional. “Moonlight” Graham would have been one of fiction’s (and Hollywood’s) great characters, except for the fact that “Moonlight” Graham was a real person.  He really did become the beloved town doctor of Chisholm, Minnesota. And, he really did play in just one major league baseball game. That one game was played over 100 years ago, and was the subject of a msnbc feature narrated by Keith Olbermann, entitled Moonlight Graham Remembered.

Shortly after his death in 1965, Veda Ponikvar wrote the following obituary for Dr. Archibald Graham in the local Chisholm newspaper:

As the community grew, Doc became an integral part of the population. There were good years and lean ones. There were times when children could not afford eyeglasses, or milk, or clothing because of the economic upheavals, strikes, and depressions. Yet no child was ever denied these essentials, because in the background, there was a benevolent, understanding Doctor Graham. Without a word, without any fanfare or publicity, the glasses or the milk, or the ticket to the ball game found their way into the child’s pocket.

A person would be fortunate to possess the qualities embodied by “Moonlight Graham;” humility, grace, kindness, hope and inspiration. Dr. Graham is a genuine example of a life well-spent.  Archibald “Moonlight” Graham, in life, and as portrayed in the movie, understands the true meaning of the word “tragedy.”

Did you ever sense the inner character an individual without ever meeting that person? I did, and her name is Sue-Louise Newmann. About a week ago, I was updating the Libby’s H*O*P*E* ovarian cancer video library when I came across three YouTube videos posted by Sue-Louise Newmann’s husband. Each video consists of a picture montage set to music. The picture montages reveal the couple’s special life moments such as getting married, having children, celebrating birthdays and anniversaries, and traveling overseas.  The background music playing in each video was composed and sung by Sue-Louise.

In terms of “internet presence,” I only discovered a limited amount of information about Sue-Louise Newmann.  Sue-Louise was married and a mother to two young daughters. She lived in Australia. Newmann was also the head of human resources for an Australian utility company. As a gifted songwriter and muscian, she played many of the instruments that were used to record her songs.

Sue-Louise was diagnosed with ovarian cancer in 2006, and she died in February 2009 at the age of 46. The three songs that accompany the video picture montages were recorded by Sue-Louise after her doctor informed her that she would likely live for only nine more months. The video titles (and the song titles) are Time of My Life, Waiting For a Miracle, and Don’t You Forget About Me. I extend my highest gratitude to Sue-Louise’s husband for creating and publicly sharing these videos.

Time of My Life

Despite the fact that I never met Sue-Louise, the video picture montages leave no doubt that her life was filled with love, family, and music. Sue-Louise’s inner character shines bright in each picture. I believe that Sue-Louise possessed “ordinary grace,” a term coined by the author Kathleen Brehony in her book bearing the same title.  In that book, Brehony explains that ordinary grace does not only live in great cathedrals and holy ashrams, it lives in ordinary people who have found a place in their lives for love, generosity and simple kindness. Sue-Louise’s ordinary grace manifests itself in her pictures, as well as the notes and lyrics of her songs. In proper context, the death of Sue-Louise Newmann, as a wife, a mother, a friend and a talented songwriter, is clearly a tragedy. The loss of any women from ovarian cancer is a tragedy.

The loss of Archibald “Moonlight” Graham and Sue-Louise Newmann is certainly tragic, however, their lives exemplify hope and inspiration. Dr. Graham turned the loss of a professional baseball career into a life of helping others through medicine and random acts of kindness. Sue-Louise Newmann also lived a full life. When confronted with imminent death from ovarian cancer, Newmann chose to write and sing beautiful songs that will forever touch and inspire us.  Each individual, when faced with difficulty or life-threatening circumstances, chose to inspire hope in others. In the end, such inspiration creates an everlasting legacy that transcends death.

So, the next time you experience a bad day, a career disappointment, an angry driver, or a curt salesperson, take a moment to realize that these events do not rise to the level of a tragedy.  And, at the end of each day, ask yourself the following question: “How will I be remembered in my eulogy or tribute video?”

*”Vox Populi,” a Latin phrase that means “voice of the people,” is a term often used in broadcast journalism to describe an interview of the “man on the street.”

In the spirit of Vox Populi, Libby’s H*O*P*E*™ searches online for original pieces of writing or visual media created by ovarian cancer survivors, survivors’ family members, cancer advocates, journalists, and health care professionals, which address one or more aspects of ovarian cancer within the context of daily life. The written and visual media features that we discover run the gamut; sometimes poignant, sometimes educational, sometimes touching, sometimes comedic, but always honest. The Vox Populi feature may take the form of an essay, editorial, poem, letter, story, song or picture montage.

It is our hope that the Vox Populi feature will allow our readers to obtain, in some small way, a better understanding of how ovarian cancer impacts the life of a woman diagnosed with the disease and her family. We invite all readers to submit, or bring to our attention, original written or visual media pieces suitable for publication as Vox Populi features.

2 thoughts on “Vox Populi:* How Do Your Define “Tragedy?””