Eliminating cancer stem cells (CSCs) within a tumor could hold the key to successful treatments for ovarian cancer, which has been notoriously difficult to detect and treat, according to new findings published this week in the journal Oncogene by Yale School of Medicine researchers.

Eliminating cancer stem cells (CSCs) within a tumor could hold the key to successful treatments for ovarian cancer, which has been notoriously difficult to detect and treat, according to new findings published this week in the journal Oncogene by Yale School of Medicine researchers. 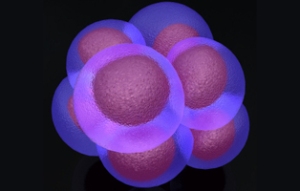 Ovarian cancer is challenging to treat because it tends to recur frequently and develop resistance to treatment. The poor outcome for women with ovarian cancer is associated with subtle and nonspecific symptoms—earning it the moniker the “disease that whispers.”

“This recurrence and drug resistance may be due to the presence of CSCs within the tumors that have the capacity to reproduce and to differentiate into non-CSC tumor cells that repopulate the tumor mass,” said Huang, who is a member of Yale Stem Cell Center and Yale Cancer Center. “Eliminating these CSCs may be key to successful treatments.”

While in the process of studying the functions of stem cell proteins in human embryonic stem cells, Huang and her colleagues unexpectedly discovered that a sub-population of ovarian cancer cells express stem cell proteins Lin28 and Oct4. They also found that the two proteins appear to act together in ovarian cancer tissue cells to produce more advanced tumors. Inhibiting their combined expression led to a significant decrease in the growth and survival of cancer cells. A larger-scale ovarian cancer study is currently underway to confirm the significance of the findings.

Genetic researchers prevent genes from functioning — a process commonly referred to as “knocking down” the gene — by inserting small interfering RNA (siRNA) molecules into the cells. Next, the research team will examine the effect of siRNA in ovarian cancer cells in the lab, and test the technique on mice. If successful, human clinical trials would follow. Treatment on cancer patients could occur within 10 years, Huang said.

“We hope we will soon be able to apply this new information to improve outcomes, perhaps by developing better diagnostic markers and treatment strategies that may be useful in customizing treatment for ovarian cancer patients,” said Huang.

The study was supported by Connecticut Innovations, the Fannie E. Rippel Foundation and the National Cancer Institute.

Other Yale authors on the study included Nita Maihle, Ph.D., and Shuping Peng.