On June 13, 2012, the federal government will publish a proposed rule that will add ovarian cancer to the list of conditions covered by the World Trade Center Health Program. It is anticipated that the proposed rule will take several months to finalize prior to becoming effective. The WTC Health Program was established by the James Zadroga 9/11 Health and Compensation Act of 2010, which provides health benefits and financial compensation to those harmed by the attacks of September 11th and its aftermath.

The World Trade Center Health Program (WTC Health Program) was established by the James Zadroga 9/11 Health and Compensation Act of 2010, which provides health benefits and financial compensation to those harmed by the attacks of September 11th and its aftermath.

The WTC Health Program provides services to responders, workers, and volunteers who helped with rescue, recovery, and cleanup at the World Trade Center and related sites located within the defined “New York City disaster area.” It also provides services for survivors who lived, worked, or were attending school in the area. The WTC Health Program will also be serving responders to the 9/11 attacks at the Pentagon in Arlington, Virginia, and the Flight 93 crash site in Shanksville, Pennsylvania

The WTC Health Program is administered by the National Institute for Occupational Safety and Health (NIOSH). After conducting a long-term study, NIOSH stated in a recent administrative filing that it favored a major expansion of the existing $4.3 billion WTC Health Program to include eligible individuals with 50 types of cancer, covering 14 broad categories of the disease. The specifics underlying NIOSH’s administrative decision will be published on June 13, 2012 in the Federal Register as a Notice of Proposed Rulemaking, entitled World Trade Center Health Program; Addition of Certain Types of Cancer to List of WTC-Related Health Conditions. Within the proposed rule, ovarian cancer (i.e., “malignant neoplasms of the ovary”) is listed as one of the enumerated cancer types.

Pursuant to NIOSH’s proposed rule, the WTC Health Program will provide medical testing and care for specific symptoms and illnesses related to being exposed to the disaster sites. The services will be provided by clinics and hospitals that have expertise in the diagnosis and treatment of 9/11-related health conditions.

It is important to note that NIOSH’s proposed rule does not represent a final administrative determination. The Notice of Proposed Rulemaking is subject to public review and a 30-day comment period. Once public comment is received, NIOSH will consider and address those comments as appropriate before issuing a final ruling. The proposed rule may change prior to finalization, or it may not be finalized at all.

If NIOSH determines that it is appropriate to issue a final rule to cover select cancer types, and a final rule is published, additional steps would be necessary before an eligible responder or survivor could receive care and treatment under the WTC Health Program. The physician diagnosing the cancer would be responsible for reviewing the individual’s exposure history to determine whether her cancer could be related to a 9/11 exposure; the individual’s diagnosis must then be certified by NIOSH before care and treatment can begin.

In preclinical testing, Mount Sinai School of Medicine researchers demonstrated the anti-ovarian cancer effectiveness of AT-406, an inhibitor of apoptosis proteins, as a single agent and in the combination with carboplatin.  As of this writing, Ascenta Therapeutics is conducting an open and ongoing phase I clinical study in patients with advanced solid tumors and lymphomas.

Human cells are programmed to survive, die or proliferate through a complex system of regulatory controls.  Apoptosis — also know as “programmed cell death” — is a precisely regulated, complex process through which normal cells in the body die after a given life span, ensuring that defective, damaged, or redundant cells are eliminated.

The human body use apoptosis, or programmed cell death, to eliminate abnormal or unwanted cells. As a result of accumulated genomic alterations, it seems that cancer cells often fail to execute an apoptotic program, which allows them to live indefinitely and grow uncontrollably. The breakdown of the cellular apoptosis regulatory machinery is sometimes a dominant characteristic of cancer. Many current cancer therapies, including chemotherapeutic agents, radiation, and immunotherapy, work by inducing apoptosis in cancer cells. However, because the normal apoptotic biological pathways are sometimes defective, many cancer cells are inherently resistant or develop resistance to various therapies.  An emerging direction for drug development involves the direct targeting of apoptotic proteins to induce cell death and/or reduce treatment resistance.

AT-406 — A New Inhibitor of Apoptosis Proteins — is Effective in Preclinical Testing Against Ovarian Cancer. 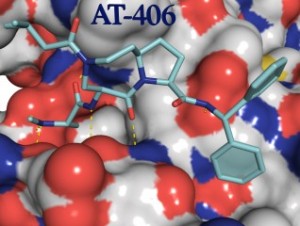 AT-406 is a novel and orally-active small molecule drug designed to promote programmed cell death (apoptosis) in tumor cells by blocking the activity of inhibitors of apoptosis proteins (IAPs), including XIAP, c-IAP1, c-IAP2, and ML-IAP, to create conditions in which apoptosis can proceed.  Based on this designed activity, AT-406 is best described as a multi-IAP inhibitor. IAPs are key components of the complex cascade of protein signaling that activates enzymes (called “caspases“) to initiate the breakdown of the cancer cell. AT-406 is thought to mimic the activity of Smac (second mitochondria-derived activator of caspases) by binding to XIAP and preventing it from inhibiting caspase activation. Upon binding to cIAP1 and cIAP2, AT-406 induces rapid degradation of these proteins and promotes apoptosis through activation of the death-receptor complex and caspase 8.

Ascenta Therapeutics (Ascenta), the developer of AT-406, reported that the drug has already demonstrated single-agent antitumor activity in multiple preclinical xenograft models of human cancer, including breast cancer, pancreatic cancer, prostate cancer, and lung cancer. Ascenta also noted that AT-406 has also been shown to work synergistically with conventional chemotherapeutic and targeted agents (such as TRAIL and tyrosine kinase inhibitors) in preclinical tumor models.

Mount Sinai School of Medicine researchers evaluated AT-406 in ovarian cancer cells as a single agent, and in the combination with carboplatin, for therapeutic effectiveness and mechanism of action. The researchers reported that AT-406 had significant single agent activity in 60% of the human ovarian cancer cell lines examined in vitro, and inhibited ovarian cancer progression in vivo. Notably, three of the five carboplatin-resistant cell lines tested sensitive to AT-406, thereby highlighting the therapeutic potential of AT-406 for patients with inherent or acquired platinum drug resistance.

Additionally, the researchers also determined that AT-406 enhanced carboplatin-induced ovarian cancer cell death and increased the survival of the experimental in vivo test mice. This result suggests a synergy created by this two drug  combination, whereby AT-406 sensitizes the response of these cancer cells to carboplatin. From a mechanism of action perspective, the researchers demonstrated that AT-406 induced apoptosis correlated with the drug’s ability to down-regulate XIAP,  whereby AT-406 induces cIAP1 degradation in both AT-406 sensitive and resistant cell lines. Collectively, these results demonstrate, for the first time, the anti-ovarian cancer efficacy of AT-406 as a single agent and in the combination with carboplatin. The researchers believe that AT-406 may represent a novel therapy for ovarian cancer patients, especially for patients exhibiting resistance to the platinum-based therapies.

Ascenta is currently conducting clinical trials of AT-406 within the U.S. in patients with a variety of solid tumors and lymphomas. As of this writing, Ascenta is conducting a phase I, dose-escalation, open-label, multi-center study (University of Michigan Comprehensive Cancer Center, Mayo Clinic, and Duke University Medical Center) in patients with advanced solid tumors and lymphomas to evaluate the safety, tolerability and pharmacology of AT-406 when administered orally. The ClinicalTrials.gov Identifier Number for this trial is NCT01078649.

It is important to note that phase I trials usually enroll a small numbers of patients who have advanced cancer that cannot be treated effectively with standard treatments, or for which no standard treatment exists. Although evaluating the effectiveness of a drug is the primary goal of a phase II (not phase I) clinical study, medical investigators do look for evidence that the study treatment might be useful in a phase I clinical study.