Two separate research teams reported promising results last week based upon preclinical studies involving the use of diphtheria toxin to fight ovarian cancer. … A targeted gene therapy was utilized in both studies, wherein a gene fragment capable of producing diptheria toxin was combined with a nanoparticle which was targeted against a unique or overexpressed genetic characteristic of the ovarian cancer tumor cells. Both research teams reported significant reduction in ovarian cancer tumor mass and extended survival for the treated mice. Based upon these findings, one research team already announced the opening of a Phase I/II clinical trial which will test the novel therapy on patients with advanced stage ovarian cancer.

Targeted Gene Therapy In the Fight Against Ovarian Cancer

The peritoneal cavity is a common site of ovarian cancer and accompanying ascites caused by the disease. Ascites is an abnormal buildup of fluid in the peritoneal cavity that causes swelling.  Malignant tumor cells may be found in the ascites fluid in connection with late stage ovarian cancer.  Massive ascites and the related abdominal distention can cause anorexia, nausea, vomiting and respiratory difficulties, and negatively impact the patient’s quality of life. Ovarian cancer patients frequently experience disease involvement of the pelvic and retroperitoneal lymph nodes as well. The standard primary treatment of patients with advanced stage ovarian cancer is cytoreductive surgery followed by platinum drug and taxane drug doublet chemotherapy. Despite this aggressive approach, there is a high rate of disease recurrence. Although discovery of several other active nonplatinum cytotoxic agents has improved outcome, long-term survival rates are low. Success of traditional chemotherapy has been limited by drug resistance and lack of specificity with respect to disease formation and progression. Thus, novel “targeted” ovarian cancer therapies that achieve improved long-term disease control with lower toxicity are desperately needed.

A so-called “targeted therapy” utilizes drugs or other medically manufactured substances (e.g., small molecule drugs or monoclonal antibodies) to block the growth and spread of cancer by interfering with specific molecules involved in cancer tumor growth and progression.  By identifying and selectively focusing upon molecular and cellular changes or unique genetic characteristics that are specific to cancer, targeted cancer therapies may be more effective than other types of treatment, including chemotherapy, and less harmful to normal cells.

It is possible for a targeted therapy to incorporate a gene therapy. Gene therapy is an experimental treatment that involves the introduction of genetic material (DNA or RNA) into a human cell to fight a disease such as cancer.  When both therapeutic approaches are combined by researchers, a “targeted gene therapy” is the result.  A targeted gene therapy is an attractive approach to controlling or killing human cancer cells only if the therapy can selectively identify and exploit the genetic and epigenetic alterations in cancer cells, without harming normal cells that do not possess such alternations.

Two separate research groups reported promising results last week based upon preclinical studies involving the use of diphtheria toxin to fight ovarian cancer.  The toxin is produced by a deadly bacterium (Corynebacterium diphtheriae).  A targeted gene therapy was utilized in both studies, wherein a gene fragment capable of producing diptheria toxin was combined with a nanoparticle which was targeted against a unique or overexpressed genetic characteristic of the ovarian cancer tumor cells.  Both research teams reported significant reduction in ovarian cancer tumor mass and extended survival for the treated mice. Based upon these findings, one research team already announced the opening of a Phase I/II clinical trial which will test the novel therapy on patients with advanced stage ovarian cancer.

The first study, which appears in the August 1 issue of the journal Cancer Research, was conducted by a team of researchers from the Massachusetts Institute of Technology (MIT) and the Lankenau Institute of Medical Research (Lankenau Institute). In this study, the researchers used a nanoparticle as a delivery vehicle (or vector) for DNA that encodes a diphtheria toxin suicide protein (DT-A).  The novel nanoparticles are made with positively charged, biodegradable polymers known as poly(beta-amino esters). When mixed together, these polymers can spontaneously assemble with DNA to form nanoparticles. The polymer-DNA nanoparticle can deliver functional DNA when injected into or near the targeted tissue.

The nanoparticle carrying the DT-A is designed to target overexpression of two genes (mesothelin (MSLN) and HE4 (or WFDC2)) that are highly active in ovarian tumor cells, but not in normal cells. Once inside an ovarian cancer tumor cell, the DT-A disrupts the tumor cell’s ability to manufacture critical life sustaining proteins, thereby causing cell death.  Accordingly, the choice of the DT-A fragment of a diptheria toxin gene ensures high ovarian cancer cell killing activity.  It also avoids unintended toxicity to normal cells because the DT-A released from destroyed ovarian cancer cells is not able to enter normal neighboring tissue cells in the absence of the DT-B fragment which was excluded from the original nanoparticle delivery system or vector.

As part of this study, researchers administered DT-A nanoparticles directly into the peritoneal cavity – which encases abdominal organs such as the stomach, liver, spleen, ovaries and uterus – of mice xenografted with primary and metastatic ovarian tumors.  Ovarian cancer is known to initially spread throughout the peritoneal cavity, and current therapeutic approaches in humans include direct injection into the peritoneal space, thereby targeting the therapy to the ovaries and nearby tissues where tumors may have spread.

“… [The researchers] discovered that the intraperitoneal (IP) administration of DT-A nanoparticles resulted in a significant reduction in ovarian tumor mass and extended survival for the treated mice.  The researchers also found that the targeted gene-therapy treatment was as effective, and in some cases more effective, than the traditional chemotherapy combination of cisplatin and paclitaxel. …” 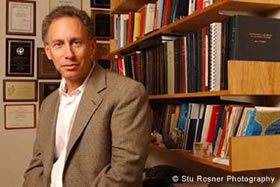 Robert S. Langer is the David H. Koch Institute for Integrative Cancer Research Professor (there are 14 Institute Professors at MIT; being an Institute Professor is the highest honor that can be awarded to a faculty member). Dr. Langer has written approximately 1,050 articles. He also has approximately 750 issued and pending patents worldwide. Dr. Langer’s patents have been licensed or sublicensed to over 220 pharmaceutical, chemical, biotechnology and medical device companies. He is the most cited engineer in history.

Janet Sawicki, Ph.D., Professor, Lankenau Institute of Medical Research. Dr. Sawicki also serves as an Associate Professor at the Kimmel Cancer Center of Thomas Jefferson University. Her ovarian cancer research is funded by the National Institutes of Health, the U.S. Department of Defense, the Sandy Rollman Foundation, the Teal Ribbon Ovarian Cancer Foundation, and the Kaleidoscope of Hope Foundation.

Daniel Anderson, Ph.D., research associate in the David H. Koch Institute for Integrative Cancer Research at MIT and a senior author of the paper, and others from MIT, including Institute Professor Robert Langer, along with researchers from the Lankenau Institute, led by Professor Janet Sawicki, discovered that the intraperitoneal (IP) administration of DT-A nanoparticles resulted in a significant reduction in ovarian tumor mass and extended survival for the treated mice.  The researchers also found that the targeted gene-therapy treatment was as effective, and in some cases more effective, than the traditional chemotherapy combination of cisplatin and paclitaxel. Furthermore, the novel therapy did not have the toxic side effects of chemotherapy because the diptheria toxin gene is engineered to function in ovarian cells but is inactive in normal cell types.

Based upon these finding, the MIT and Lankenau Institute researchers concluded that IP administration of DT-A nanoparticles, combined with designed targeting of those nanoparticles against ovarian tumor cell gene (MSLN & HE4) expression, holds promise as an effective therapy for advanced-stage ovarian cancer. According to Anderson, human clinical trials could start, after some additional preclinical studies, in about 1 to 2 years.  Currently ovarian cancer patients undergo surgery followed by chemotherapy. In many cases, the cancer returns after treatment.  Disease recurrence is problematic because there are no curative therapies for advanced-stage tumors.

For several years, the MIT-Lankenau Institute team worked to develop the DT-A nanoparticles as an alternative to viruses, which are associated with safety risks. In addition to ovarian cancer, these nanoparticles have demonstrated treatment potential for a variety of diseases, including prostate cancer and viral infection. “I’m so pleased that our research on drug delivery and novel materials can potentially contribute to the treatment of ovarian cancer,” Langer said. In future studies, the team plans to examine the effectiveness of nanoparticle-delivered diphtheria toxin genes in other types of cancer, including brain, lung and liver cancers.

Other MIT authors of the paper are recent MIT Ph.D. recipients Gregory Zugates and Jordan Green (now a professor at John’s Hopkins University), and technician Naushad Hossain. The research was funded by the Department of Defense and the National Institutes of Health.

The second study was conducted by Israeli researchers and was published August 6 online ahead of print in the Journal of Translational Medicine.

In the provisional study report, the researchers note that based upon earlier studies from their team and others, the H19 gene has emerged as a candidate for cancer gene therapy. The H19 gene is expressed at substantial levels in ovarian cancer tumor cells, but is nearly undetectable in surrounding normal tissue cells.  Although the Israeli research team acknowledges that the exact function of H19 is the subject of past debate, it notes that recent data suggests a role for H19 in promoting cancer progression, angiogenesis and metastasis.

Based upon these finding, the researchers note that although the study report issued is provisonal, it is their working hypothesis that intraperitoneal administration of DT-A/H19 nanoparticles holds the potential to (1) reach ascites tumor cells, (2) deliver its intracellular toxin without targeting normal tissue cells, and (3) reduce tumor burden & fluid accumulation; and therefore, improve the patient’s quality of life, and hopefully, prolong her survival.

In the provisional study report, the researchers state that the targeted gene therapy was administered to an Israeli patient with advanced, recurrent ovarian cancer, who qualified for compassionate use treatment under Israeli regulatory rules.  Specifically, the patient’s intraperitoneal ovarian cancer metastases and ascites were treated with the DT-A/H19 nanoparticle therapy after the failure of conventional chemotherapy. The results of the single patient compassionate use trial suggest that the drug caused no serious adverse events at any drug dosage level.  Moreover, the patient experienced (1) a 50% decrease in serum cancer marker protein CA-125, (2) a significant decrease in the number of cancerous cells in the ascites, and (3) a clinical improvement as reported by her doctors.  It is reported that the patient’s quality of life increased during the course of treatment and her condition continues to be stable, with no new cancerous growths.

The DT-A/H19 nanoparticle therapy is being developed commercially by BioCancell Therapeutics, Inc (BioCancell) Recently, BioCancell announced the opening of a clinical trial to test the DT-A/H19 nanoparticle therapy (also referred to as BC-819) in patients with advanced stage ovarian cancer.  The clinical trial is entitled, Phase 1/2a, Dose-Escalation, Safety, Pharmacokinetic, and Preliminary Efficacy Study of Intraperitoneal Administration of DTA-H19 in Subjects With Advanced Stage Ovarian Cancer, and the trial investigators are recruiting patients in the U.S. and Israel as indicated below.

In the provisional study report, the Israeli researchers discuss the importance of collecting data regarding the correlation between the level of ovarian cancer cell H19 expression and the efficacy of the treatment as part of the clinical trial discussed above.  Based upon accrued future clinical trial data, the researchers believe that they will be able to identify in advance patients that will respond to this novel therapy, as well as non-responders who are resistant to all known therapies, thereby avoiding treatment failure and unnecessary suffering and cost.